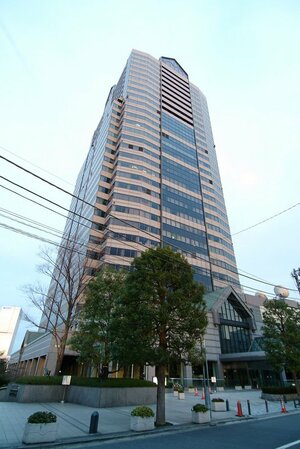 Akasaka Park Building (Photo: Tsuyoshi Tamai)
Enlarge
REIT Japan Real Estate (JRE) will incorporate the Akasaka Park Building in Akasaka, Minato-ku, Tokyo in its assets for 60.8 billion yen [$750 million]. The seller is Mitsubishi Estate, the REIT’s sponsor.
Mitsubishi Estate will lease all of the office and retail floors from the REIT and sublease them to tenants. All of the residential floors will be leased to Mitsubishi Real Estate Service, which will sublease the units to tenants.
The building is a five-minute walk from the Akasaka subway station. It is adjacent to Akasaka Sacas, a mixed-use complex consisting of the TBS Broadcasting Center, office and retail spaces, a concert hall and other facilities.

Mitsubishi Estate and its subsidiary Mitsubishi Real Estate Service will lease the spaces under pass-through type master lease contracts. The REIT expects the net operating income (NOI) under normal operating conditions at 2.83 billion yen [$35 million] and based on this, the cap rate against the acquisition price is 4.7%.

The REIT announced it will acquire the property because of the concentration of foreign companies in the Akasaka area, the fact that the area’s brand image has been improving following the development of Akasaka Sacas and because the area has convenient access to transportation. The large standard floor space of 616 tsubo [2,000 m2], a rarity in the three wards (Chiyoda, Chuo and Minato) of central Tokyo was also highly valued.

Daiwa Real Estate Appraisal appraised the property at 62.5 billion yen [$770 million] as of 1 October, 2011. Mitsubishi Estate will continue to manage the building after the sale.

Mitsubishi Estate, the seller, has set the book value of the property at 35.3 billion yen [$440 million] and the income from the sale of the property will be posted in the current term (the third quarter of the term ending March 2012).